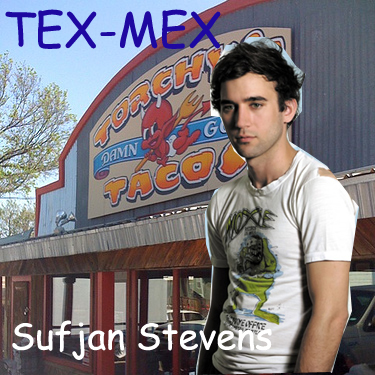 After five years of waiting, Sufjan Stevens’ 50 states project is back on with a new record, Tex-Mex: Cholula Yum-O. It’s due September 7 on Asthmatic Kitty/Rachael Ray Recordings.

“Basically, I’ve been eating a lot of tacos,” Sufjan said in a press release. “I didn’t want to repeat myself with another ‘state’ album. I wanted to do something fresh, spicy and marginally international.”

The 18-track album will feature songs including “Turn Around And I’ll Shoot You In The Face, Motherfucker (Ballad of Dick Cheney),” “Torchy’s Tacos (Eat Me Raw)” and “The Worst Levi’s Fader Fort After Party Ever.”