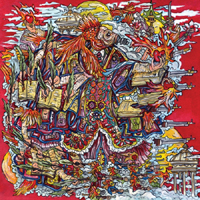 Of Montreal’s last full-length was a confused, ADD mess that splattered genius moments across its 58 minutes like Jackson Pollack on a bender. Those days appear to be over. On False Priest first single “Coquet Coquette,” the influence of Jon Brion – who produced/helped out with the album after Of Monter Kevin Barnes had it pretty much tracked – is immediately obvious: actual drums, a Macca bass line, huge guitar chords.

The shift in tone, though, is all Kevin. “Coquet, coquette,” he opines, Shakespeare-like, “You are the death / you are the pinnacle” – a return to the maudlin but relatively heteronormative love/hate songs of Hissing Fauna, Are You The Destroyer? Assuming Barnes can get through the record without singing about being a black she-male – not that there’s anything wrong with that! – False Priest may find him reining back his id just enough to let his ego (and Brion) craft another set listenable for longer than 45 second bursts.  (Via P4k)

(False Priest is due 9/14, pre-order it from Polyvinyl)