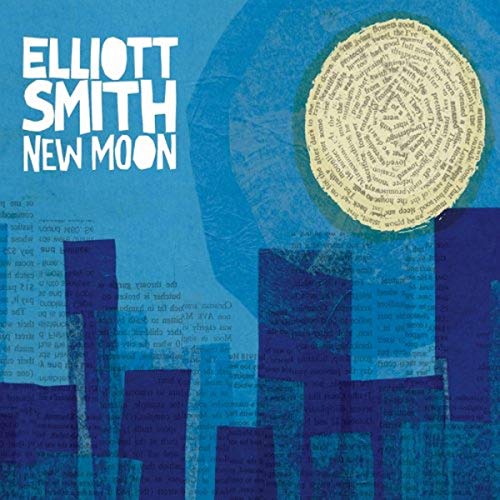 Not like it should be any surprise if you’re a regular reader, but I think Elliott Smith is the finest artist of his generation. From his musicianship and recording mastery to his singular songwriting and harrowing performances, he’s as good as it gets; he’s been my favorite musician for seven years now and I doubt that’ll ever change.

So you can imagine how totally, ridiculously excited I am about the upcoming early/unreleased compilation, New Moon, which spans the Kill Rock Stars years: 1994-1997. Most of the songs we’ve heard already in the form of the Basement II bootleg, so the real prize is going to be the new tune — “All Cleaned Out.” There are some other rarities: “First Timer,” which was later reworked as “From a Poison Well,” which leaked fairly recently, and hopefully a version of “Go By” with vocals but probably not.

But let’s make this easier. Here’s a handy track list that sort of lays out the songs a little more clearly.

% – Brand new!
# – Previously released: “Angel in the Snow,” “Big Decision” and “See You Later” (an acoustic version of one of Smith’s Heatmiser songs) were all b-sides
* – From the Basement II bootleg
@ – From the second wave of “Basement” leaks
+ – From the Either/Or sessions bootleg
= – From the Jackpot (XO) sessions bootleg
$ – Songs we don’t know about for sure: “Half Right” is a Heatmiser song, but I don’t think any of his bootlegs include a recording of it. Presumably it’s just acoustic. “Go By” is probably the instrumental version from the Either/Or sessions, but he performed it once with words — we can hope! I believe he recorded “Thirteen” twice — this is probably the Lucky 3 soundtrack version and not the more recent Thumbsucker soundtrack recording. “Miss Misery (early version)” is likely the leaked solo piano demo. But any of these songs could surprise us, and I hope they do.

Edit, 4/23: Having heard the album now, here’s what the mystery tracks are:
“Half Right” is a solo acoustic version of the Heatmiser song. “Go By” has words (!). “Thirteen” is the Lucky 3 version, and “Miss Misery” is a solo acoustic recording with different (but amazing) lyrics.

Actually, the whole thing is laid out by song on the album’s Amazon page, so you can find that here.

Obviously this collection demonstrates that Basement II has little to do with From a Basement on the Hill. II is still the best Smith bootleg to get, as the fidelity of many of the songs improves upon their appearances on the Either/Or sessions bootleg or the impossibly scratchy Place Pigalle demos and it contains a number of otherwise-unavailable songs.

I’ve done a lot of reading about how engineer and archivist Larry Crane transfered over Smith’s tapes and cleaned them up. Now, thanks to Pitchfork posting an advance track, we get to hear it firsthand. After listening to the mixed and mastered version of “High Times,” I’m pretty happy: the fidelity is moved up a few notches and the mix is much sharper, as well as being in line production-wise with the type of sound Smith was doing with Either/Or. However, it is markedly different than the rough mix Smith did himself, as you’ll be able to hear, so it’s frustrating to think of what could’ve been done with the songs if Smith himself had overseen the process. That said, he wasn’t ever going to put these songs out anyway. For some of the particularly rough-sounding songs (the unbelievably gorgeous original/alternate version of “Pretty Mary K”), this collection will presumably be the best way to listen to them and an essential part of anyone’s Smith discography. But it’s nice to have the bootlegs, too.

Looking for new music? Click below for more recent and upcoming records.