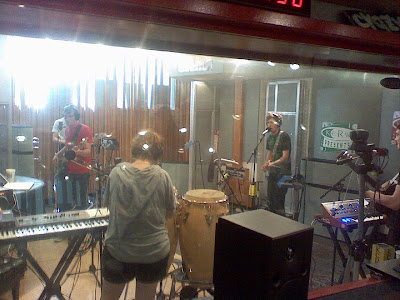 I took this picture with my phone!
A few weeks ago, I had the pleasure of kicking it with Architecture in Helsinki as they finished off a tour with a performance in the KCRW studios. Despite a couple awkward technical hitches, the band quickly got their footing and burned through a set that featured a few oddities, including a smoking cover of “Beef in the Box” by British prog-rockers IQ.

AiH were exceptionally cool; between giddily quoting lines from fellow New Zealanders Flight of the Conchords, they taught me a little Down Under slang – I now know what it means to “fang it out.” (Yes, I get vocab lessons from indie rock stars; I am cool.)

Anyway, I was quite taken with their just-released single, “Heart It Races,” which will figure on their latest Polyvinyl long player, Places Like This. The song is an epic dub-meets-the-Buzzcocks affair which I present to you thusly.
Architecture in Helsinki – “Heart It Races”: mp3

Looking for new music? Click below for more recent and upcoming releases or visit the Album Release Calendar.