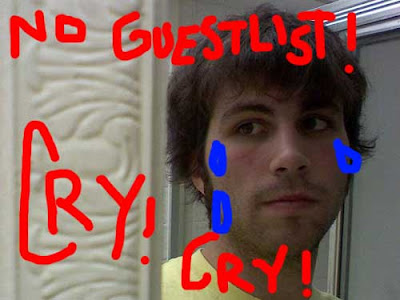 There was a time, maybe six months ago, when getting eviscerated – or even name-dropped – on Gerard Vs. Bear signaled one’s arrival into the blogosphere. Six months is like a decade in Internet time, though, and now getting a shout for a relatively innocuous post like this one from the still-sort-of-anonymous Gerard is merely good enough to earn a lengthy response (and inevitable second evisceration) from Idolator. Sheesh.

In a really great article in alt-weekly The Phoenix, writer Christopher Gray deals with the existential angst of being a Ryan Adams fan. It’s one of the better articles about the guy, and I’m not just saying that because I was interviewed for the piece.

L.A. kids: Our pal An Aquarium Drunkard is presenting a show at the Silver Lake Lounge tonight – Pink Nasty and Lee Bob Watson. Sounds like a solid bill to me, but hear some tracks over at A.D. to judge for yourself.

On the blogger redesign tip, Culture Bully got a makeover a few weeks back. I was going to make an America’s Next Blog Model joke but I think that means I need another cup of coffee.

Cuban Linx: All the news that’s fit to blog. Click below for more.