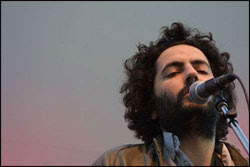 I’ve kept pretty mum on this, but Destroyer‘s Trouble in Dreams (in stores now!) is the best album released this year. So far. It’s not quite as good as Rubies, but few albums are — certainly none released in 2006.

Vulture has a concise but revealing interview with head Destroyer Dan Bejar, in which he discusses that part of “My Favorite Year” that apparently everybody hates and I’ve actually come to enjoy: I’m kind of cackling this line, ‘Beware the company you reside in.’ And it’s not very sonorous. It’s not pleasing to the ears. But I kind of just went with it. Trademark Dan.

I typed a few (hundred) words on the album for Cokemachineglow. The band will be making a Los Angeles tour appearance on 5/19 at the Troubadour, and you can stream the album here.

Aaaand I posted a great radio session bootleg a while back. So get to destroying.