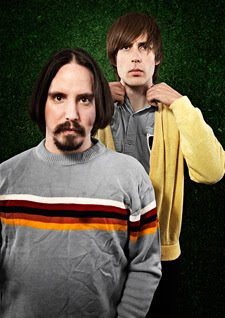 Jim Guthrie, formerly of Royal City and the crafter of 2003’s tremendous Now, More Than Ever, doesn’t need any help making records. His brand of tender, copiously arranged folk walks a thin line between twee cartoonishness and orchestral seriousness — the last thing he needs is a collaborator to tip him too far in either direction. But Nick Thorburn from Islands, a laughably cartoonish (and unbearably pretentious) band who I didn’t like any better when they were post-Twee as Fuck firebrands the Unicorns, appears to have done just that. Pairing as Human Highway, Guthrie and Thorburn’s first single is “The Sound” a song that’s basically half awesome Guthrie-isms and half shitty Islands-isms. Hopefully August debut Moody Motorcycle will find them fixing the ratio.

(Moody Motorcycle is due 8/19 on Suicide Squeeze)