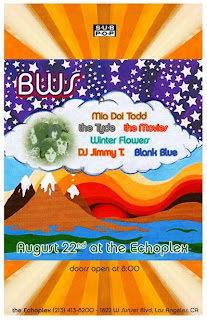 Gram Parsons famously dubbed the songs he played “Cosmic American music.” Perhaps no band embraced the possibilities of the genre as much as the short-lived Beachwood Sparks, a Los Angeles band who followed in the California tradition of Parsons and the Byrds over two albums and an EP that saw bleary-eyed psychadelics share barstools with cowboy twang and sugary, high-pitched melodies worthy of the band’s Sub Pop home. The Spark’s self-titled debut was one of the first entries in our The Canon, Examined series, and it remains one of my favorites of the decade, a quiet, quirkly classic that never got its due.

With a little luck, that’s about to change. The group reformed to play the Sub Pop 20 festival, they’re planning a third album and they’ll be in Los Angeles on Friday at the Echoplex and on Sunday at Sunset Junction, baptizing non-believers with country-rock holy water (read: whiskey, pedal steel). I’ll be at both shows, singing along with “Silver Morning After” until my heartstrings break or somebody stops buying me drinks, whichever comes first.