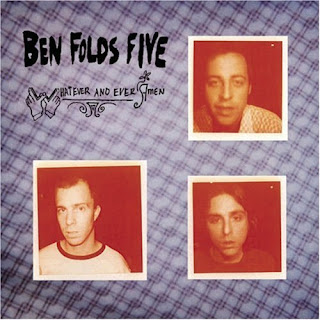 In honor of Mr. Ben Folds playing in Los Angeles tonight — which will, unfathomably, be my first time seeing him proper, not counting a quickie gig he did at the Virgin Megastore a few years back — we have the second installment of Learn To Love.

Ben Folds Five seem horribly under-appreciated these days, perhaps thanks to the ubiquity and one-hit-wonderishness of “Brick,” but they’re so much more than that. Billing themselves as players of “punk for sissies,” Ben Folds Five were a relative anomaly in ’90s indie rock, matching the era’s teen angst against ’60s pop harmonies and musical chops on the level of previous piano men like Elton John and Billy Joel (but so much more gloriously unhinged). Over three albums and a b-sides & rarities collection, their songs ranged from ironic anthems (“Underground,” the best ever song about being a hipster/loser/whatever) to thoughtful ballads (“Don’t Change Your Plans”), from bass-heavy to Bacharach-tinged. They were my first favorite band; I love them dearly, and I hope you will too.

Learn To Love: An introduction to awesome. Every Friday. Click below for more.