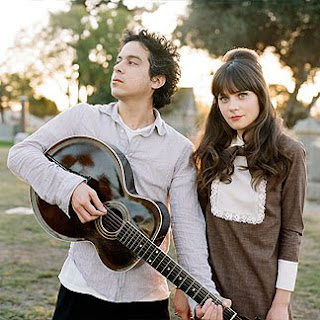 It begins! Paste‘s year-end top 50 is typically, well, Paste-y — the No. 1 spot goes to She & Him (an upset pick, but not an unexpected one) and strummy, folky fellas like Bon Iver and Fleet Foxes placed top 10. Vampire Weekend was high as well, as it’s likely to be on every list this year. So let’s pick out a few of the surprises after the jump. [Continue reading…]

2. Sigur Rós – Med sud i eyrum vid spilum endalaust
This is a nice catalog record from a consistently great act, but, uh, what?

7. Girl Talk – Feed the Animals
I’d say I know the magazine’s taste pretty well, and it’s a little awkward to see a record like this — and also two Santogold albums, Jesus — shoehorned in to fill up the trendy/dance music quotient. A top 10 pick for this smacks of career Oscar; dude’s last record was hipper, and better. (And won’t be anywhere near my list.) And Hot Chip but no Cut Copy? Sheesh.

22 No Age – Nouns
See No. 7. Glad Gentleman Jesse beat them but depressed not to see my boy Chad VanGaalen on here or Women’s s/t debut, a much better record than Nouns with all of the noise and none of the hype.

??. Ryan Adams & The Cardinals – Cardinology
Did he really not make the list? A year after scoring a cover story for a weaker album? For shame, fellas.

The full list is here… what do you think? More to come, I’m sure.