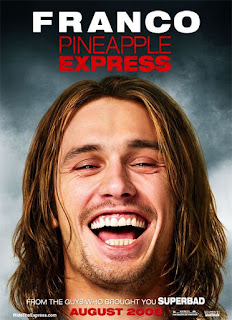 James Franco was the best part of my favorite marijuana-related film of 2008, so I’m high as a kite over the news that he earned a Golden Globe nomination for Best Actor in a comedy or musical — alongside Dustin Hoffman and Javier Bardem! — for his turn as Pineapple Express‘ weed-smoking/selling Saul.

I’ll confess to having not gotten to most of this year’s awards crop yet, but I’m glad Robert Downey Jr. got a nom for Tropic Thunder (though Tom Cruise’s is overkill) after his banner year as well as seeing four well-earned nominations for Woody Allen’s tremendous Vicky Cristina Barcelona. And obviously Heath Ledger is more than deserving in the Supporting Actor category for his much-lauded take on the Joker in The Dark Knight — but where’s the best picture nom for the Bat-flick? I guess pot comedy is one thing, but comic book movies remain second-class citizens. Still, the Oscars loom — cross your fingers, Bat-fans! One more bummer: Nothing for my favorite movie of the year, Charlie Kaufman’s widely misunderstood Synecdoche, New York.