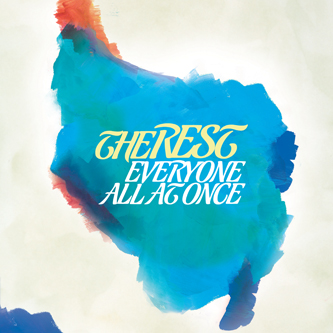 Without going too deep into how much better Canadian indie bands, as a rule, seem to be than their American counterparts over the last decade, Everyone All At Once is just some astounding shit. The Rest are an Ontario band. This is their second album. But it moves with the grace and tremendous power of an act with a searing, undeniable vision and mountains of emotion that seldom translates into music this epic, if only for lack of funds. And yet, the album begins with the richness of “Coughing Blood/Fresh Morning Air,” a song soaring into the heady heights of, oh, “Staralfur” or “How To Disappear Completely,” replete with what seem to be the real strings of orchestral fantasias underpinning drifting guitars and their singer’s straining falsetto. It’s less coughing blood than a rush of it to the head.

The Rest aren’t the only band to approach this territory recently, but where an act like Shearwater favored Talk Talk’s more minimal approach on last year’s Rook, Everyone is as maximal as the title implies. And why not? So much is lost in restraint, and while ambition is a gamble, the Rest rarely play a poor hand. There’s the occasional misstep – “Phonetically, Phonetically,” is a track that could pass a cousin to Radiohead’s “Nice Dream” until it clomps and stomps into a jarringly poppy Wolf Parade homage complete with la la la’s. The song recovers quickly and goes back into dream-rock mode, though, and all is forgiven. The more bombastic moments are tempered by the tender folk of songs such as “Drinking Again,” a plucked acoustic ballad that sounds like the product of a bedroom, a four-track and a particularly lonely night. “Blossom Babies Part Two” is a bouncy indie-pop track that swells into something more guitar-damaged; “In My Attic, Souvenirs” is a sad clown of a song, drowning its sorrows in insistent drumming.

I know I’ve been a fountain of praise recently, but you’ll have to trust me when I say I’ve left my hyperbole at the door this year. We’ve been gifted with a full array of new classics in recent weeks: Grizzly Bear’s spectral folk, Harlem Shakes’ Technicolor rock, St. Vincent’s mad hatter jams, and now, the Rest’s sweeping chamber-dream-pop. Let it carry you to Xanadu.

The Rest – “Apples and Allergies”: mp3