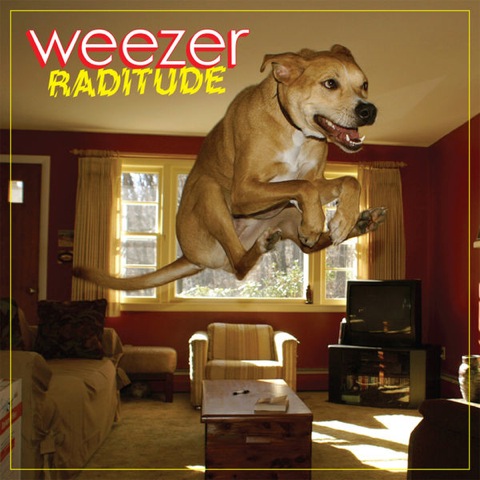 This post — drawn mostly from my Twitter, uh, live-tweeting of my first and hopefully only listen to this album — assumes that you, dear reader, know and love the first two Weezer albums and have watched the band’s baffling career path since with a mixture of hope and nausea. With that in mind, a track by track review of the latest in Rivers Cuomo’s ventures into madness lies after the jump.

“(If You’re Wondering If I Want You To) I Want You To”: An astonishingly successful jam. Off to a good start.

“I’m Your Daddy”: Terrible verses, great chorus. It’s impossible to tell who Rivers’ influences are anymore. The verses sound like the horrible bands who came after Weezer Mk. 1 and tried to rap, too, circa 2001. (Aside to Slate’s Jonah Weiner: Being nostalgic, or worse, apologetic for this era is like reminiscing about your favorite gas chamber at Auschwitz. Come on, dude.)

“The Girl Got Hot”: Survives by the grace of Rivers’ fountain of eternal nerd, but is otherwise a Sugar Ray song.

“Can’t Stop Partying”: An anthem for “The Hills” generation and about as ironic (read: not) as “Beverly Hills.” But — Weezy guest verse! Can he do all the verses? Please?

“Put Me Back Together”: “My hairdo isn’t cool / and my lips are lined with drool” – Rivers Cuomo, Harvard grad. Token ballad, solid enough. Sounds like the crappy bands that followed Weezer’s glory days because one of them co-wrote it.

“Tripping Down The Freeway”: Riv-dawg’s voice sound great on this one, with a fun line about dude needing “physical love” made funnier given his personal sexual saga. Mad generic on the music front, though.

“Love Is The Answer”: With the title and sitars, a Beatles parody? Rivers doesn’t know what a parody is at this point. Disaster. Also, unlike “The Girl Got Hot,” this is — no shit — actually a Sugar Ray song. From Music For Cougars, no less.

“Let It All Hang Out”: In which Rivers makes a song about going out with his homies and pretty ladies sound heartbreaking. Whatever.

“In The Mall”: The spiritual sequel to “In the Garage,” I’m sure. Some of the album’s strongest harmonies and guitar work, squandered on a song that 15-year-olds probably can’t relate to in 2009. Dude should’ve written about Twitter.

“I Don’t Want To Let You Go”: Another token ballad, but one not written by the All-American Rejects and without any flagrantly atrocious lyrics. It’s… almost… charming!

In sum: It sounds like the album they could’ve made in 2002 instead of Maladroit if they’d been trying to compete with The Vines and, like, Good Charlotte (or even the All-American Rejects, who got a writing credit on this album). As “modern rock” goes, this isn’t a bad album — it’s miles more tuneful, and for that matter, fun, than any macho flyover rock or outdated Orange County pop-punk. To be fair, most of these choruses crush and there’s a handful of jams but the lyrics are embarrassing throughout and I wish Rivers would write some riffs again. In other words, long-suffering =W= fans, as the man himself once said: Why bother? It’s gonna hurt me.