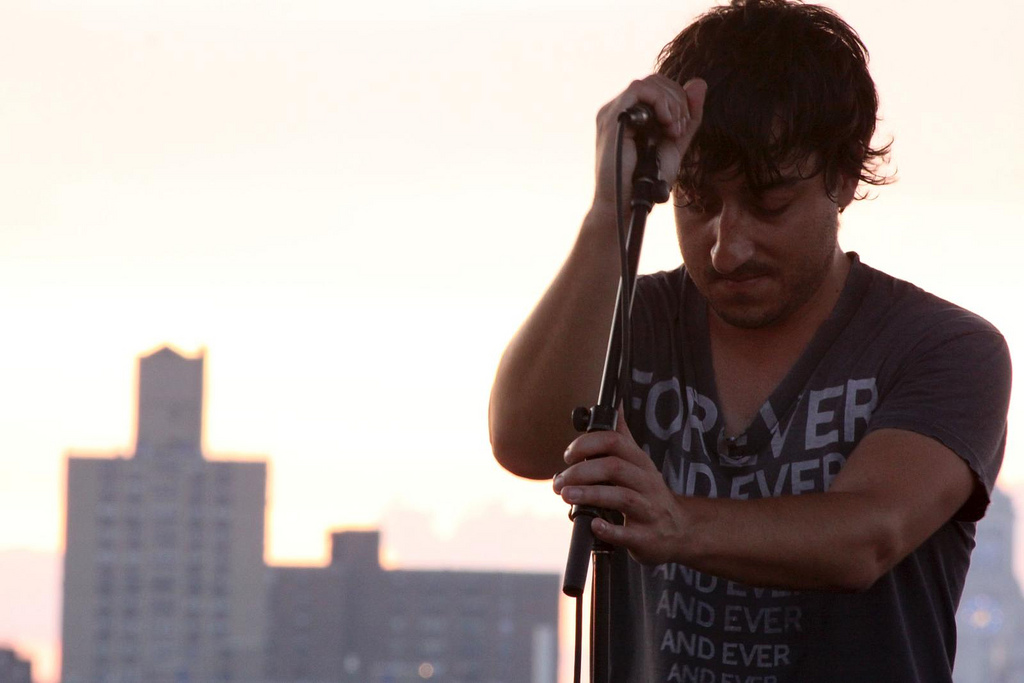 Edward Droste of Grizzly Bear in Brooklyn / photo by Forklift

Due to a fuck-up in the chain of publicity/venue command, I wound up without a photo pass to Grizzly Bear‘s triumphant performance at the Hollywood Palladium on Tuesday night, a hometown show for singer/guitarist Daniel Rossen and the biggest solo headlining space they’d ever played. A shame. (And a continually troublesome failing in the concert industry at large’s dealings with journalists, but I digress.) Not a shame, at all, in fact, was the band’s show, which was large and cathartic enough to fill a room that could’ve swallowed them up.

Despite the cavern of the hockey rink-sized room — and the vastness of the crowd, a sea of flannel, black cardigans and the occasional enlightened (and inebriated) sorority girl — Grizzly Bear sizzled fearlessly through a thunderous set that seemed delivered directly from the hand of Zeus. Both new songs and old, from the opening of “Southern Point” to the closing notes of “On a Neck, On a Spit,” were heavier and harder than they are on record, dominated by the athletic percussion of Christopher Bear — the band’s unsung hero — and Rossen’s butcher chop rhythm guitar.

Still, the band’s necessary attention to heaviness in the live setting didn’t weigh down the ethereal beauty that makes their records so special. Their vocals — sometimes four at a time, or intertwined in the wondrous countermelodies of songs such as “Ready, Able” — rose skyward like a rainbow through the clouds. It would’ve made a hell of a photo.