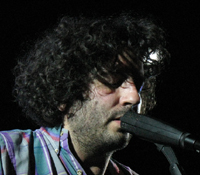 Dan Bejar hasn’t left us wanting since the release of 2008’s underrated Trouble in Dreams. The chief Destroyer embarked on a solo tour this spring, released the epic Bay of Pigs EP, and in an October solo show in Montreal, debuted another new track — the surprisingly personal “Chinatown.”

“This is a song I wrote about where I live,” Dan notes, a rare admission from a lyricist whose works are usually labyrinthine enough for minotaurs. And the look into his private world isn’t a pretty one: “I drink my wine from a porcelain cup / I fall down!” he growls at the song’s climax, continuing, “I know you and I know the score / I can’t walk away / you can’t walk away.” Is Bejar growing transparent as his career lengthens? Hard to say: “So that was a protest song,” he deadpans at the performance’s conclusion. Well, as long as it’s not about Roman Polanski.