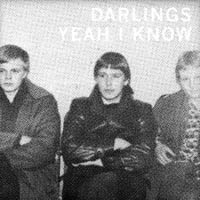 I should preface this review by saying Darlings frontman Peter Rynsky and I met as we waddled out of toddlerdom in the spring of 1990, me with an already unhealthy obsession with women and him, from Russia with love, with only a halting command of English. In 2003, we performed in dueling rock bands at our high school talent show, me playing rhythm guitar and covering the Beatles and him singing lead and playing an original. Now he’s being written up in SPIN and I, um, write a blog. How we’ve grown.

Yeah I Know is the product of a healthy fascination with the Beach Boys, the Velvet Underground and the Strokes (mostly the Strokes), an NYU education, a Brooklyn practice space and a low budget; pop songs punctuated by pummeling feedback. Rynsky writes songs about drinking too much and trying to get laid and sleeping on couches. The band sounds like Girls if they weren’t joking or Wavves if they cared. It smells like college and tastes like Pabst Blue Ribbon. It’s immensely satisfying; I’m very proud. But for the record, our Beatles cover totally killed.

(Yeah I Know is out now on Famous Class)