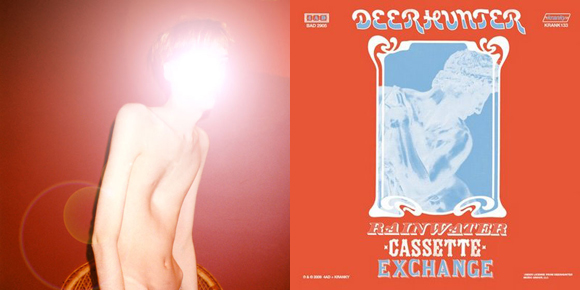 The last time I wrote about Deerhunter, somebody told me I had penis fingers. (I’m hoping the commenting crew will step its game up this time around.) That was two years ago and my fingers are as penis-y as ever, but having blissfully ignored the band and frontman Bradford Cox’s Atlas Sound side-project ever since, we’re probably due to check in. Do they sound like Jesus yet? They’re getting there!

Of the new stuff, Atlas Sound’s Logos is the more impressive disc, and one of my favorites the of year. An ill-fitting but bubbly enough Panda Bear cameo track aside, it’s a well-flowing collection of sleepy, swirly ambient pop — the fusion of melody, structure and adventurous sonics that Deerhunter’s early stuff hinted at but rarely achieved. In many ways, it sounds like the lost sequel to Akron/Family’s gloriously strange debut album — a set of fragmented 21st century folk as steeped in the future as the past. Shaky guitars play against shakier vocals amid a sea of expertly knob-twiddled fuzz that recalls the studio mastery of the Microphones’ lo-fi epics. For pure beauty this year, there’s little better than songs such as “My Halo” or “Criminals,” tracks as abstract and disarming as purposefully blurred photographs.

Rainwater Cassette Exchange, on the other hand, is a bit more nebulous. At times it slides easily into “Blue Hawaii” pineapple balladry (the title track, “Game of Diamonds”) and at others, it revs up Strokes-style guitar fuzz (“Famous Last Words”) — both unexpected, but welcome, shifts from Cryptograms‘ anti-pop fumblings.

On either disc, though, it seems that Cox has grown from an experimentalist with potential into a maturing, adventurous musician with enough simmering talent to start following religiously — but you can probably go on ignoring his exploits in the Pitchfork newsfeed every week.

(Editor’s Note: I’d let to get year-end stuff up before Christmas this year but there’s a bunch of great albums I haven’t covered in depth yet, so next week will likely be a rundown of some favs I’ve managed to miss, with year-end albums/songs/editorializing to follow. Stay tuned.)