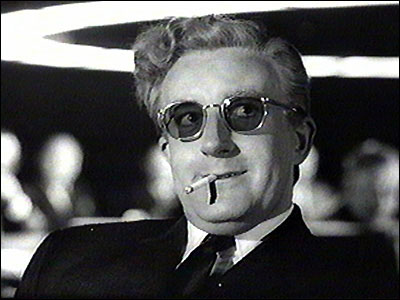 As a relative newcomer to Stanley Kubrick (I’ve seen The Killers, Spartacus and bits of Full Metal Jacket), it’s hard not to be blown away by the directorial verve of Dr. Strangelove or: How I Learned To Stop Worrying and Love the Bomb. Released just two years after the Cuban Missile Crisis and one before Vietnam, the film filters Cold War paranoia through a series of thinly veiled comedy routines, making a mockery out of government incompetence and military short-sightedness. Shot in gorgeously contrasted black-and-white with the occasional wide-angle lens to add to the cartoonish humor of the proceedings, it’s an energetic cinematic effort even as it documents men in confined spaces (the multi-talented, multi-roled Peter Sellers, in particular), blustering in circles. Kubrick’s message — escalation never ends (and never thinks), even in the face of doomsday — was a bold one at the time, but in the still-fresh wake of eight years of the Bush administration, it’s no less audacious, or affecting, now.