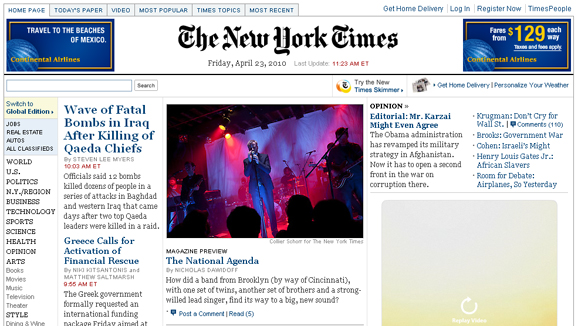 The National’s thoroughly excellent High Violet is now streaming on the New York Times‘ Web site, which also carries a gushing five-(web)-page spread on the slow-burning Brooklyn band. Has the Old Grey Lady ever done a full album stream premiere, much less one with this much cachet and anticipation attached? Either way, it’s impressive, and couldn’t have happened to a more deserving band. (Update: They’re on the front page of NYTimes.com. Wow.)

One notable portion of the interview:

With ‘Lemonworld,’ ” Matt said afterward, “we tried so hard and it always seemed to fail as a rock song. It lost the charm of the ugly little demo. Now it’s the ugliest, worst-mixed, least-polished song on the record, and it took the longest to get there.”

I agree — it’s definitely the record’s low point, if only because the title recalls the much more inspiring “The Geese of Beverly Road,” its glimmering world and its big slice of lemon.

The National: All Posts