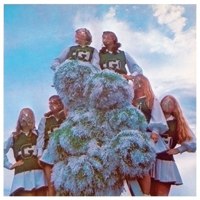 Your tolerance for Sleigh Bells’ debut, Treats, might be measured by your enjoyment of, say, G.I. Joe or Transformers 2. Yes, this is a ridiculous, arguably disastrous album, full of hyper-in-your-face fireworks and one nonsensical action scene after another. Recorded with purposefully hair-raising digital clipping and designed to ruin speakers and encourage drinking (that’s just science, guys), Sleigh Bells is a big, dumb, beat-bloated party record — the inevitable offspring of Andrew WK, the Lenny Kravitz version of “American Woman” and Dirty Projectors. And, uh, I kinda love it! Indie rock’s ascent from the bedroom to the dance floor has been a bit of a brutal climb for those of us who started off nerding out to the likes of Elliott Smith and the Decemberists, but now that our guys are topping charts and headlining festivals, maybe it’s time to embrace the blockbuster era. At least until Oscar season.

While you’re here, though, a quick question: this album sold 12,000 copies via digital in its first week, entirely on the strength of a few NYC and SXSW performances and the wholehearted endorsement of Pitchfork and a coke-snorting blogosphere. At the time of this writing, it has been downloaded over 3,500 times on one popular underground music torrent site, in addition to however many uncountable message board Mediafire downloads. Nevertheless, 12K! Sold! For a band that the Internet has been aware of literally since October 2009. What happened to piracy?! Are you guys actually spending real dollars on practically imaginary digital products? You might as well buy a World of Warcraft +5 battle axe on eBay. I demand an explanation: please take the poll.

(Treats is out now on Mom+Pop)