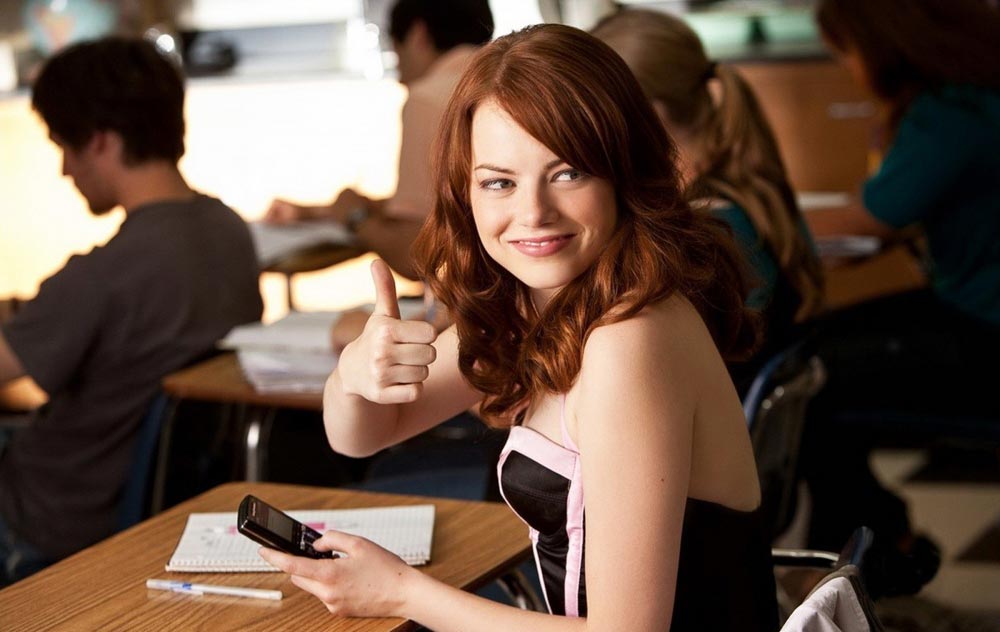 * This movie wants so badly to be really good! It makes pop culture references and notes movie cliches and tries to self-awarely transcend them (but does not). It clearly invokes Mean Girls and the John Hughes filmography (also films starring charming redheads) and, especially, Saved, and features a sharp-tongued, wiser-than-her-years heroine who you root for from the jump.

* Reasons this movie is not good: The adults, satellite characters in films like Mean Girls and Clueless, get most of the laughs here. At times, it plays like a funhouse mirror of an O.C. episode with Stanley Tucci as Sandy Cohen. (Not to mention Cam Gigandet, who was on The O.C. AND Twilight, which earns a nod and a chuckle here.) They’re also Diablo Cody-level quirky, which grates pretty quickly. More importantly: the “teen” cast, shining star Emma Stone excepted, is completely terrible. Remember the murderer’s row Lindsay Lohan had alongside her in Mean Girls? Rachel McAdams, Lizzy Caplan, Amanda Seyfried? In Easy A, Aly Michalka plays the kind of bombastic, dumb popular girl who’d never befriend anyone as nerdy as Stone’s Olive (and doesn’t have a single punchline), while Amanda Bynes literally plays the same character that Mandy Moore nailed to the fucking wall in 2004’s Saved. This wouldn’t be a problem if Bynes could act her way out a confession booth or the character and the thorny religious elements had any of the depth, heart or actual introspection of, well, Saved. But that’s not the case.

* Which brings us to the real issue: There are no stakes at all in this movie. Olive is identified as a girl nobody pays attention to; she gains a reputation via rumors for allegedly sleeping around — which, in a 2010 high school and as a graduating senior, would hardly make her a classroom laughingstock — and then, drawing backlash for her faked misdeeds… learns nothing? If there’s a moral here, it doesn’t go beyond “Lying is bad!” or “High school sucks!” or “Popularity isn’t worth the price!” Come on. The worst thing that happens to Olive? [Spoiler] She’s faced with protestors holding signs and a schmuck dude tries to pay her for sex in a totally non-threatening way. At least douse her in paint or something, filmmakers! Throw eggs at her! Let her parents ground her! None of this happens. Instead, the guy she likes arbitrarily likes her too, her parents are like, “Whtvz, gurrrrrl” and life goes on. In the meantime, there just aren’t enough laughs.

* Speaking of ridiculous things: Olive’s 17 and smart! She should be applying to college or at least aware that by fall, she gets to peace out on all this drama. Less importantly, but still notable: The students texting around her misadventures Gossip Girl-style are on pudgy pre-RAZR flip phones. Unless this film was supposed to be set in 2003, which it is not because it references Gossip Girl and Twilight, this is baffling.

* The movie’s awkward handling of Christianity is one thing; it even more awkwardly handles homosexuality via a character who decides to hide his real feelings to fit in before [spoiler] running off with “a hulking black guy”; the pair is pictured cuddling and watching a heavy-handed interracial scene in a Huck Finn movie. Also, Olive has an adopted black brother, which is supposed to show how open and empathetic Olive’s parents are, but actually serves to showcase that the film doesn’t want to hand out any of the reasonably important roles to people of color. (There’s a really, really awkward Indian/Latino gag that I won’t even get into.) None of this is particularly racist or homophobic or offensive: it’s just sloppy and aimless and unfunny.

* One saving grace: Emma Stone, as you can see in any movie she’s ever been in, can handle both being a drool-worthy leading lady (her outfit in the third act musical number, good lord) and a comedienne with timing sharper than a stopwatch. She deserves many, many more big-screen vehicles and is already a more capable actress than her most obvious predecessor, Lohan, ever was. But like Anna Faris’ overdue top-billed turn in The House Bunny (another film Stone was funny and great in), Easy A is simply not worthy — and like every Sandra Bullock movie, too, it makes a disheartening case for Hollywood’s ability to give our most talented women the films they — and we — ought to have.