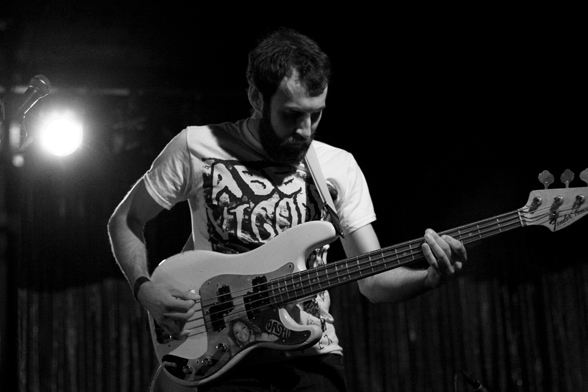 Have Women let themselves go? With all due respect to, ahem, actual women, the Calgarian band’s Public Strain initially seems like a plump, comfortable effort compared to 2008’s self-titled debut, a release tighter than Taylor Lautner’s abs and considerably more charismatic. At 11 tracks and 42 minutes, Public Strain is 12 minutes and one song longer than its predecessor; instead of the Television-like guitar lightning bolts that dueled their way across Women, we have feedback and stretch marks.

But that’s just the first song. Keep listening, delete-key fumblers: second track “Heat Distraction” once again offers the quartet’s trademark treble-heavy guitar scribbling, colored across an epic four minutes (a lifetime by previous Women standards). The elegant melody of “Penal Colony,” the set’s lone ballad, plays like the Velvet Underground covering “My Way.” “Bells,” an instrumental three minutes of droning keyboards and amplifier feedback, recalls the meditative, repetitive soundscapes of ambient masters such as Eluvium or Growing, but as the album eases into its second half, its convincing gentleness takes a knife to the gut.

Locking into a Krautrock groove, “China Steps” unleashes ear-shattering guitars that slug back and forth like final-round boxers. “Drag Open” ups the violence, its dirt-spitting instruments gnashing like a pack of extremely rhythmic wild dogs. It’s heavy enough to make Liars reconsider their pedal collection, but unlike recent noise-makers such as Sleigh Bells, Women never bleed into the red — Public Strain is lo-fi, not high volume. The sound — and perhaps the band’s surprising, welcome patience — is the product of returning producer (and valuable solo artist) Chad VanGaalen, who makes the album inseparably the product of his home studio. Judging by these songs, it’s a place where bad ideas come to die — and great ones, stretch marks be damned, are born. (Ed. note: The band canceled its tour and maybe broke up a few weeks back — please buy this record and convince them not to quit.)

(Public Strain is out now)