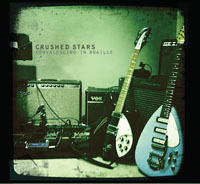 In a year deluged with jangling guitars and vocals drowning in enough reverb to kill a Olympic swimmers, please summon the strength to listen to Crushed Stars’ Convalescing in Braille with fresh ears. Like The Radio Dept. or, before them, Yo La Tengo, the band’s lonely pop places craft first. Even its simplest moments seem examined for maximum headphones richness: how the lightly clipping drums of “Spark” contrast with singer Todd Gautreau’s distant, wounded vocals; reaching the bottom of of the 10-foot-deep cymbals of “Black Umbrellas”; the firmness of piano keys against warbling synthesizers on “A Day Without You.” It’s less treble-heavy and propulsive than the Radio Dept.’s latest efforts, but the songs also explore feelings of landlocked loneliness. “You look at me that way again / and I will fall,” Gautreau sings on “Fall.” In love, we can only assume, but few have ever sounded more beautifully miserable at the prospect.

(Convalescing in Braille is out now)