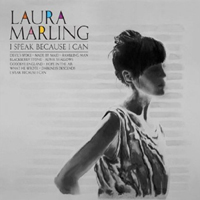 I have mixed feelings about Laura Marling’s sophomore album. It’s more assured and confidently arranged and performed than her winning debut, but, like Midlake’s latest album, its sense of joy seems missing in action. She’s never been the most optimistic performer, but things seem dimmer here than on Alas I Cannot Swim. Rays of sunshine do land in “Darkness Descends” (oddly enough) and the self-assertion ballad “Goodbye England”; it’s all utterly lovely, her beyond-her-years vocals hovering over acoustic guitars and string sections as her lyrics chase after Dylan and Van Morrison’s mythic journeys. After Joanna Newsom, it’s probably the folk album of this slight (for the genre) year, frankly. Still, the underlying good feeling of Alas I Cannot Swim would’ve been a nice addition (not to mention its sharper hooks). LP3 awaits.

(I Speak Because I Can is out now)