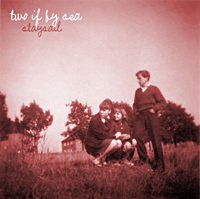 Like the Clientele’s early, more whispery work, Two If By Sea’s “Apron of Flowers” jangles under a London fog — though the band hails from London, Ontario. The song’s not much more than a handful of chords and featherweight percussion, but its loveliness belies any considerations of heft. The same is true for compilation single “Westbound Train,” which adds a Yo La Tengo synthesizer and ironic dance groove to the mix to charming, reverb-swaddled effect.

(The band’s Staysail EP is out now on February Records.)