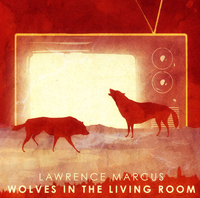 Fans of the Mountain Goats will find a kindred spirit in Lawrence Marcus, a New Yorker whose debut album recalls John Darnielle’s eloquently hard-charging folk-rock. Tersely strummed chords at the ready, Marcus covers busted relationships, alcohol and the occasional comedy bit, his lyrics a patchwork of location-specific details and internal uncertainty. His reedy voice plays just fine atop a single acoustic guitar on songs such as “Come to Me” and “Harlem Meer,” but broader arrangements — an electric guitar here, a legato piano chord there — add flavor to tracks including “Composure Delenda Est” and “Intense Song for Glenn Danzig to Sing.” It’s really an intense song for Marcus to sing, of course, and Wolves in the Living Room announces a sharp new songwriter who has many more ahead of him.

(Wolves in the Living Room is out Sept. 27 on Bandcamp)