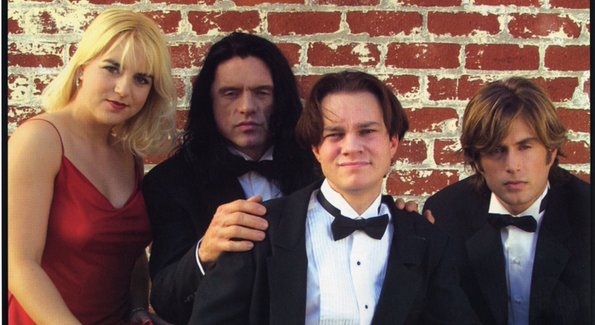 Since its 2003 release, Tommy Wiseau’s cinematic opus The Room has become our generation’s answer to the Rocky Horror Picture Show. Entertainment Weekly called it the “Citizen Kane of bad movies”; the inscrutable Wiseau, who starred, scripted, directed and produced the film, has been hailed as a “genius-savant” by Salon; there may yet be a national plastic shortage from the countless spoons thrown at midnight screenings across the country during audience-favorite lines such as “You are tearing me apart, Lisa!” But what if I told you that Wiseau’s cult car crash was in fact an elaborate tribute to an Oscar-nominated Hollywood landmark? Because it totally is! I happened to see 1955 classic Rebel Without a Cause at the Hollywood Forever Cemetery’s Cinespia screening recently, and, well, the facts don’t lie:

“You are tearing me apart, Lisa!” – Many writers and critics have noticed that The Room’s most celebrated line appears in Rebel Without a Cause’s first act, as Jim (James Dean) lashes out at his baffled parents (video). It’s even the same shot—close in on Dean, his hands raised and voice anguished. Without the “Lisa,” of course. But the comparisons don’t end there.


“You’re chicken! Cheep, cheep, cheep” – A key moment in Rebel comes when Jim, new to the school, is called a chicken by the local kids, leading him to accept their leader’s inevitably tragic challenge to a “chickie run.” The same insult, complete with arm-flapping and fowl impersonations, is a running motif in The Room, though mainly to coerce a character to play football in a tuxedo. (This is where the “genius-savant” thing comes in.)

The love triangle: In Rebel, Jim pursues the equally parent-hating Judy (the imminently pursuable Natalie Wood), but the crux of the film emerges once he meets John, who goes by the nickname Plato. Plato is an outcast in search of a friend, or as Jim comes to realize, a father figure. (A 2011 viewing finds him heavily coded as gay: he asks the handsome Jim to spend the night with him and shows little interest in Judy, while Jim’s third-act line “Are you ready to come out?” becomes a double entendre.) Once the trio arrives at an abandoned mansion, they play around like schoolchildren before Plato panics after being left alone as Jim and Judy head upstairs for more mature activities. It’s mirrored in the relationships of The Room, which find Johnny (Wiseau) an unofficial adoptive father to Denny (Phillip Haldiman) – who joins him and Lisa (Juliette Danielle) in a similar rough-housing sequence before one of the film’s trademark sub-Cinemax love scenes. But the latter film inverts the character’s affections, giving Denny an uncomfortable crush on Lisa instead of Johnny.

The red dress: In The Room, Denny tells Johnny that Lisa looks great in a red dress, a gift that Johnny buys her; in Rebel, Jim wears an iconic red Harrington jacket throughout the second half, ultimately giving the garment to Plato.

Plato/Denny’s troubles: Plato is brought to the police in the film’s opening for shooting animals and later admits to “head-shrinker” visits; Denny is shaken down by a drug dealer (the wonderfully named “Chris-R”) and won’t admit to what he’s taken. The whereabouts of both characters’ parents remain mysterious.

The gun: (Spoilers, of course.) Both films end with a death; in both cases, the gun that’s the source of the climax arrives with Plato/Denny. Both deaths are needless: in The Room, Johnny kills himself with Denny’s drug dealer’s weapon after Lisa’s betrayal, while Plato is shot upon running toward the police with an unloaded pistol.

Previously: Deeper Into Movies: The Room (2003)