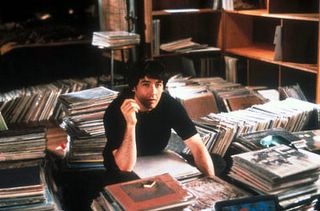 Akron/Family – Akron/Family
I know I’m late to the party with this one, but man, is it amazing. Listening to it is like climbing a mountain and climbing down again – everything builds to “Running, Returning” and slowly descends, one song at a time. It’s too raw to be “atmospholk” and too electric and modern to be roots music…I think the word I’m looking for here is “gorgeous.”
Akron/Family – “I’ll Be On The Water”: mp3

Beck with The Flaming Lips – KCRW Session, 12.24.02
My girlfriend put this on last night, and the versions with the Lips destroy the original Sea Change cuts. There’s much more liveliness and the idiosyncrasies that make Beck so great, injecting a little humor into songs which are downright morbid on the album. Wish I’d caught this on tour.
Beck with The Flaming Lips – “Do You Realize”: mp3

John Coltrane – Giant Steps
It’s only been in the last year – the last six months, really – that I’ve gotten seriously into jazz, and this album blows away literally everything else I’ve ever heard within the genre. For the initiated, this is totally obv. but for those of you who – like me circa last fall – don’t know Charlie Parker from Charlie Byrd from Charles Mingus, you need to get this album and do what I did, which is listen to it over and over and over until the absolute fucking genius of Coltrane’s playing suddenly blindsides you and knocks you into space. Kind Of Blue may have the name recognition, but this album will change (your life?) the way you listen to music.
John Coltrane – “Giant Steps” (alternate take): mp3

I’m going to be buying some recording gear, this week or next – I’m looking into the M-Box because it looks like they’re phasing in the M-Box 2 so I should be able to get the old one for a little cheaper. Thoughts? Also I’m looking for a condenser mic I can record vocals and acoustic guitar on. And shaker egg.