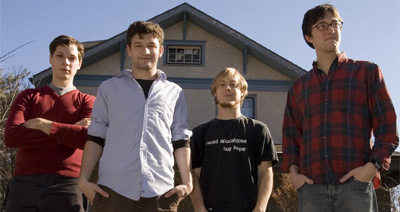 In the middle of their lengthy tour of the Soviet Union and Wilshire Boulevard apartments, the ever-charming fellas of Someone Still Loves You, Boris Yeltsin found time to fire off a few e-mail missles for the first ever Rawking Refuses To Stop! interview session. Questions were handled by Philip, a handsome man and an incredibly deep sleeper.

TRRTS!: How’s the tour going? I hope you haven’t had to sleep on a lot of floors besides mine.
Philip: The tour was rock solid. We slept on floors almost every night, but we’re not complaining. We’re not babies.

TRRTS!: What’s the story behind the band name? Fictitious answers are acceptable.
Philip: I thought of it when I was at the mall with my mom in high school.

TRRTS!: You guys just signed to Polyvinyl, which is pretty impressive – how did that come about? Did you have lots of labels after you?
Philip: We talked to a few labels, but there wasn’t a bidding war or anything. We met with Polyvinyl and it was real easy to plan things out with them, and that’s what we needed to do. This is the first time that we ever planned out our future.

TRRTS!: “Oregon Girl” was played on “The O.C.” – I’ve talked to some otherbands who were pretty “meh” about getting on the show, but what did you guys think about it? Did you see the episode? (I used to be a pretty big fan, but it’s gone downhill.)
Philip: We were pretty stoked because it was so unexpected. We didn’t have managers or licensing companies lobbying for us to get on “The O.C.” Alex, the show’s music supervisor, liked our song and that was it. If a band complains about getting their music on a TV show, then they just like complaining about things.

TRRTS!: I know you released something – a split single? – on Catbird Records, the label run by Ryan from the Catbirdseat blog. First, how did you hook up with him, and second, how much do bands like you or people you’ve toured with pay attention to blogs? I’m afraid we bloggers have a bit of an inflated idea of our own importance.
Philip: It was a split EP. I didn’t know about Catbirdseat when I first e-mailed Ryan. Actually, I didn’t know any music blogs, really. Ryan hosts Mommyheads.com and The Mommyheads are my favorite band. So I sent him our CD (it had a Mommyheads cover on it) and a few months later we were releasing the split with Michael Holt (keyboard guy of the Mommyheads). I’m cool with blogs because every blogger I’ve met is real nice.

TRRTS!: Your album Broom has a pretty straightforward style – it sounds like the band is really on the same page. What are some of your influences or favorite records? Did anybody ever say,”hey, let’s play this kind of music?”
Philip: You’re right…we write pretty simple songs because we’re all pretty mediocre musicians. The arrangements are always pretty short and simple. We’re still trying to find our sound and sound a little less like everyone we like, because we like the same things that everyone else likes. Well, except for the Mommyheads. Not too many people like the Mommyheads. Actually, Chris Walla is a huge Mommyheads fan.

TRRTS!: One of my favorite aspects of the record is that the lyrics are so quirky and great. “Pangea” has probably the biggest extended metaphor ever for a relationship – is stuff like that just part of the natural writing process or do the lyrics get written and re-written?
Philip: Me and John usually edit each other’s lyrics. We’re both pretty embarrassed when we show them to each other. We’re like..”uh…does this sound dumb?” “Yah, you should change that.”

TRRTS!: What does SSLYBY do in the van to stay occupied when you’re not sleeping or driving?
Philip: Well, we’re writing a television show called “Rise and Shine.” It’s based off a Cardigans song on their first album. It’s about two sisters. One is cute and the other one is kind of a bitch. They drink a lot of Red Bull. We have 6 episodes right now. Also, I ask people if they knew Kurt Cobain. I’ve met about 10 people who knew Kurt Cobain.

Visit the band and hear some of their music on their Web site and MySpace, and pick up the 2005 album Broom while you’re at it. It’s glorious.