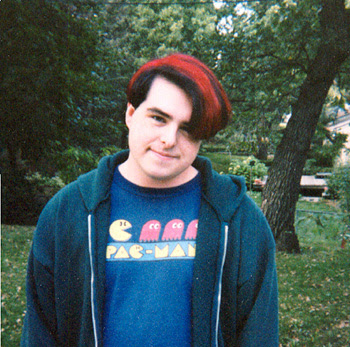 Pitchfork once had its own message board, affectionately known as Pitchfork Media Smackdown. Things got a little wild there a few years ago and the ‘Fork disowned the merry band of boarders; it has since become the independent entity known as Hipinion. Periodically the message board produces compilations to which boarders contribute covers and originals – and once, an ambitious boarder created an entire concept album around the various motifs on the board.

The musician, known only by his handle, Gonzo, crafted a double-album of songs around those themes, with none more notorious than “The Schreiber Dance.” The song is a ridiculous lo-fi Liars-esque homage to the “pudgy writer” Ryan Schreiber – Pitchfork’s Editor-in-Chief – that occasionally slips into German (!). The lyrics make reference to numerous items of p4k and Pitchfork Media Smackdown mythology: Schreiber’s embarrassing high school hair style (pictured), getting one-upped by Totally (Village Voice columnist Chris Ott’s board pseudonym), the mysterious sacking of Rollie Pemberton, and not-least, that horrible Rapture review.

In case you were curious, Schreiber heard the song not long after its release in 2005 and was floored. He declined, however, to give it a review in the We Are the World section.