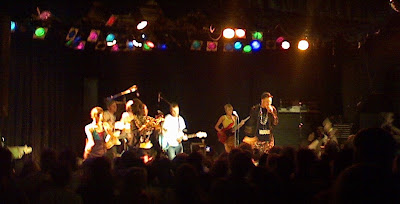 Ah yes, another of my patented cellphone pictures.

In case you’re wondering, yes, I saw Junior Senior yesterday at the Roxy.

Their amazing, wonderful, and unrepentantly joyous Hey Hey My My Yo Yo finally saw a U.S. release a couple weeks ago – two full years after it dropped abroad. I have been in an ’80s hip-hop mode lately (posts on Sugar Hill Records forthcoming), and it brought me back to the great Junior Senior sophomore album; it references Grandmaster Flash and Melle Mel explicitly and implicitly in production and lyrics. When I got a surprise e-mail yesterday from a friend with VIP passes, seeing them was basically a no-brainer.

Junior Senior careened through D-D-Don’t Don’t Stop the Beat songs to open the set; when the mustachioed Senior, rocking alphabet soup Hammer-pants and some very shiny bling, called out “Do the kids dig what we do?” the answer was a resounding “Yeah! Yeah! Yeah! Yeah!” The band then switched up to the new album songs, which the crowd knew just as well as the old album songs. The Danish rockers had given Los Angeles more than two years to prepare for this show, and damned if that wasn’t plenty of time. For their part, the seven-piece band was note perfect save Junior’s voice, which he began to lose after about half the set. (It didn’t matter: the crowd knew all the lyrics anyway.) [Continue reading…video after the jump!]

After debuting a new song – which was either unfinished or marked another stylistic shift for the band – they went into the heart-stopping “Move Your Feet,” and practically everyone in the sold-out Roxy, even in the ordinarily sedate VIP section, was bouncing up and down on the beats. It was a sight to behold.

The show was one of only a few for this run through America, but their MySpace says they have a full tour planned for the fall. I’ll definitely be there – even if I have to pay money. Here’s a video I shot with my cell-phone. Sorry it sounds bad.

***
Greg brings his camera-phone to shows. Click below for more.