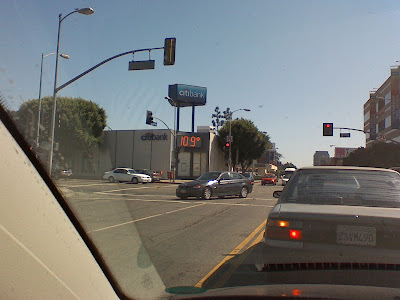 At Citibank on 3rd and Fairfax Monday. Zomg it’s hot.

Apparently while I was gone Dave “I’d just prefer if it had more acoustic guitars” Greenwald and Mark Hogan slung insults till someone told them they had “penis fingers.” Looks like I need to start posting again.

While Dave kicks it in New York, passing off gkla mixes and house music posts as his own with the hope of bagging some JDate girls, we back here on the West coast have been baking in 109° heat, prepping for the epic throwdown that will be the 10/9 Justice/Juggernauts show at the Fonda. (Buy It Now for four tickets: $400.) Even though it’s September, it’s still very much the summer of blog house over here.

Like everyone else who’s taken this fairly sudden indie-consciousness explosion of EDM to heart, I’ve been trying to get a little history of the genre. Lately I’ve been enjoying I-Robots, a compilation of early Italo-disco that dropped way back in 2004 on Irma records. The songs, some houser and some discoer, glisten with an epic, sweaty tension that informs both their immediate successor New Order, their later successors Aphex Twin and Daft Punk, and their current successors, Klaxons, Midnight Juggernauts, &c.

Here are a few of my favorites on the comp. In case you’re partial, the third doesn’t have vocals. (The first says it’s an instrumental version, but it has vocals throughout.) They are all bona fide 9.5s on the dance floor-rattling Richter scale, though.

I’ll definitely drop one or two on the next mix I do, but I’m going to wait on that till it cools down enough to focus on something besides the sweat tumbling over my eyebrows.