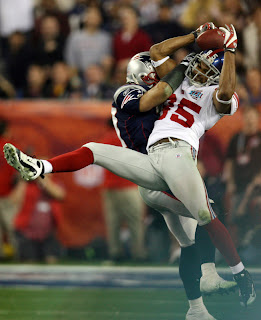 Catch of the season.

I can’t even begin to comprehend how annoying the Manning family commercials are going to be next season. Will it be Peyton Manning himself getting the pep talks now? Or Eli exacting revenge on that swift kick to the butt? Maybe they’ll flood the stations with the watch commercial that proclaims, “Unstoppable. Eli Manning is.”

A year after the elder Manning not only finally won the Super Bowl but also was crowned MVP of the game, Eli Manning pulled off the greatest upset in the history of the NFL, played the game of his career and rightfully and more deservedly was named MVP of the game. [Continue reading…]

I never was a proponent of the old adage that said “defense wins championships” but for 3 quarters, 12 minutes and 18 seconds of this game it rang true as the dominant Giants front 7 harassed Tom Brady like no other defensive unit had all season. Hit at least 18 times and sacked a season-high 5 times, his feet were off the ground more than Gisele’s in her catwalking high-heels. Brady threw more passes off target than we’d ever seen in his entire career, most of those misses notably going right in the direction of Randy Moss. Big Blue Wrecking Crew, indeed. The MVP trophy should’ve had the names of Giants defensive coordinator Steve Spagnuolo and a defensive end not named “Strahan” or “Umenyiora” (Justin Tuck) up until Tom Brady threw a touchdown to who else but Randy Moss.

Prior to 7:54 left in the 4th quarter, Manning was playing the terrific, error-free football that got him through the playoffs. His only gaffe was hardly his fault, as a bobbled catch by Steve Smith landed right in the hands of Patriots cornerback Ellis Hobbs. But Tom Brady didn’t feel like ending another season with a loss to a Manning brother and engineered another one of his sustaining drives that ate up a third of the 4th quarter and was capped off with the aforementioned pass to Moss in the endzone.

With less than three minutes left in the game, Manning was facing a 4-point deficit that stood between him and pulling off the improbable. Unlike his older brother, never did he once look comfortable when he most needed to come up big. It’s strange, Peyton and Eli are almost on opposite ends when it comes to quarterbacks in the NFL. Peyton, the genius child of Archie who diligently studies films and his playbook, has the composure of a general on the front barking his audibles and stepping up in the pocket when the pressure was coming. Eli looks lost and clueless most of the time, and scrambles to make the wobbly passes that only sometimes come through for him.

And oh, did they come through for him this time. A career-defining drive included a career defining pass for Manning, as he evaded at least two sacks and passed it for 32 yards to David Tyree on 3rd-and-5 which Tyree caught with aid from his helmet. It was a play that evoked Brett Favre or Ben Roethlisberger in their finer moments. Four plays later and with 35 seconds left, Manning tossed a fade to Plaxico Burress over the head of the outmatched Ellis Hobbs; poetic justice at its finest.

No one saw this coming, but you knew it was kinda coming. The Patriots looked like the Patriots of past, playing average and scrappy football that got them through the playoffs in previous seasons. After going on a warpath through the 2007 season, they ran into potholes along the way with back-to-back nail-biters against the Eagles and Ravens and squeaked out a 3-point victory against the Giants to end a perfect regular season. Against the Chargers in the AFC Championship, Brady was picked off 3 times but still somehow managed to win, echoing of last year’s playoff game between the two teams.

How did the Giants do it? All they needed was for their front 7 to show up against the previously impenetrable Patriots offensive line, their running backs to pick up the New England blitzes, a little bit of luck, and apparently some Manning genetics behind center.

The Sporting Life with Carman Tse: Real talk. Click below for more.