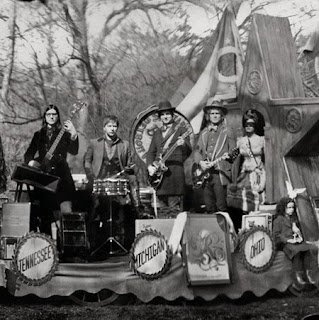 Food for thought, folks: What does a film studio do when it knows it has a stinker on its hands? Why, it skips the press screenings and dumps the movie into theaters before the nasty old critics have a chance to tear it apart and dissuade valuable audiences from coming, of course! I’m not saying the Raconteurs‘ Consolers of the Lonely is a rotten tomato – I haven’t heard it yet – but one can’t help but wonder why a band with the critical prestige of Jack White and Brendan Benson would miss an opportunity to let rock writers fawn over them early and often.

There are a number of possible reasons the Raconteurs dropped their album with a week’s warning:
1) Hey, Radiohead did it
2) Jack White was in no mood to undergo the marathon of a three-month press cycle for his fun-times side-project*
3) The album is a rotten tomato

But the biggest of all is that the three-month cycle is becoming obsolete, not even because leaks let people hear the album early anyway, but because no one wants to hear about an album for three months. Time spent reading about album art and track lists and summer tours and who the producer is and the band’s optimistic, totally vapid pre-release thoughts (“I really wanted you to not know where the songs are going; some of them stop very abruptly, others go on and on,” said Jonathan Meiburg of Shearwater in today’s P4k preview – and he’s one of the eloquent ones!) is better spent reading or actually listening to albums which are coming out (or leaking) right now. A little piece of news is just that: little. In order to get noticed, it’s better to make a big splash than spill out information a drop at a time. [Continue reading…]

So the Raconteur’s trick is a neat one, but it’s one that’s probably already exhausted its value as a headline-maker. More and more bands are going to start releasing material as soon as it’s ready to go, like Radiohead, Stars, Nine Inch Nails and a host of others have already done. It’s going to be an era of Instant Music — and delayed criticism. Whether it will force poor rock writers to stay up late listening to Radiohead to meet a morning deadline or review albums without hearing them Black Crowes-style is anyone’s guess, but I hope it creates a bit of a backlash for audiences and critics alike: In an era of too many options, it would be nice if we could admit the futility of trying to keep up with the Joneses and spend our time sorting through the mess in search of the genuine best, not the most hype-ready.

*There is no doubt in my mind that this is totally what happened.