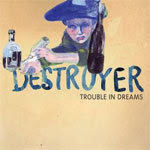 You can now stream every South Park episode ever — twelve seasons of brilliant, hilarious profanity-laden social commentary from the foul mouths of babes — on South Park Studios. Add this to the launch of streaming catch-all site Hulu and I’m never going to get anything done ever again, but at least I won’t have to pay for DVDs. Serious congrats for doing this right, TV industry.

William Bowers’ review of Destroyer‘s Trouble in Dreams (an easy album of the year contender for me) is, like all his reviews, head and shoulders above Pitchfork’s usual hyperbolic Big Picture riffing. It’s also a mostly spot-on piece of criticism. The This Night’s Rubies joke is right on in describing the album’s sound, and he notes its lack of self-reference, something I missed in my Cokemachineglow review. That certainly fits with my interpretation — I’d call it an indicator of Dan Bejar’s newly externalized lyricism. And he’s right about the album lacking that indefinable quality that makes truly great albums, but a paltry 7.7 for Destroyer’s most grandiose studio epics? For shame. (Insert conspiracy theory here about how the Fork doesn’t have much to gain from hyping aging indie mainstays vs. cred earned on breaking no-name new bands [Dodos! Fuck Buttons!] or adding to the online-crit canon [Mission of Burma reissues]…)