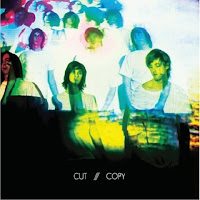 Best new music? Ask my iPod, which has been playing Cut Copy‘s In Ghost Colours on repeat all week and has to be bored by now. But I’m not. Despite being pretty unfamiliar with Colours‘ major informants — Erasure, the Human League, New Order — the album has hit me with all the weight an electro-leaning synth-rock band can muster. The electronic elements are often too fussy, cluttering up songs good enough to do without window dressing; luckily, those songs are also good enough to transcend their club-readiness.

With its thumping, four-on-the-floor beat and incisive guitars, “Lights and Music” is the band’s mission statement, but it’s “Strangers in the Wind,” with its call of “Run to the lights of the city / these moments passing will be there,” that best captures the evocative side of its New Romantic forbears. To its credit, the production’s thickness saturates the album with analog warmth; this is a dance record, sure, but it’s going to sound even better in a few months, on coastal drives through windy summer nights.