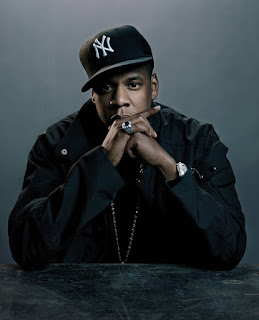 Would you give Michael Jordan $150 million to play for the Wizards? Or make him a contract extending to his 48th birthday? This is essentially what Live Nation’s done with hip-hop mogul and former greatest rapper alive Jay-Z, throwing oodles of money at him in return for a 360 deal that includes three albums over the next 10 years. Not counting the filler album he still has to record for Def Jam. To be fair, Jay (like MJ) is a business, man, but that sure is a lot of money for a guy who’s about to get married to Beyonce and start pumping out babies and has already been in retirement once. Vulture‘s already explained how dumb this is, and Lefsetz has some smart guesses about why LN’s pissing their millions away, but hey, I’m just looking forward to hearing Hov – the self-proclaimed “Rolling Stones” of rap – dropping rhymes about grey hair and Viagra.