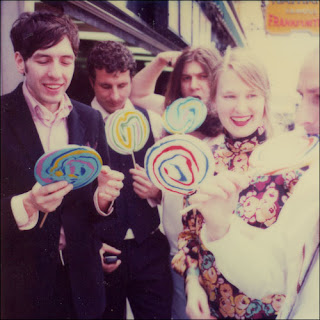 God, finally. We’re halfway into 2008 and I don’t think I’ve heard a worthwhile twee pop album yet — if I’ve missed any, be the first to let me know — but Pas/Cal‘s long-awaited debut LP might be the one. I Was Raised On Matthew, Mark, Luke & Laura is the follow-up to three EPs released between 2003 and 2006 while the band got enough of its shit together to release a full-length. An inexplicable 5 years later, it was actually worth the wait.

Listening now, I can hear why it took so long: I Was Raised… follows in the Pas/Cal tradition of cramming as many hooks and sections as possible into every minute, but this time around the tunes sound less like pop mash-ups and more like songs. Classic ones, at that — Belle & Sebastian is still a big influence, but there’s plenty of Zombies and Kinks here, along with an exuberance that’s purely Pas/Cal.

Tracks like “Summer Is Almost Here”* arrive a little late to usher in the season, but I have a feeling I Was Raised… will soundtrack sun-dappled afternoons for months to come.

*A shrewd commenter pointed out that “Summer…” came out as a single in May 2005. See, band is already way ahead of me.