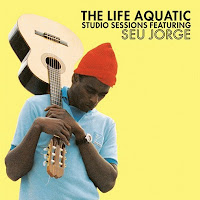 So, a few years back I did a Cokemachineglow review of Seu Jorge’s still-wonderful The Life Aquatic Studio Sessions, wherein the Brazilian songwriter does acoustic, samba-strummed covers of David Bowie classics. Being the creative goofball I am, I reviewed the album in character as David Bowie.

The piece wasn’t particularly tongue-in-cheek (just insufferably pretentious — I wonder if that’s how Bowie actually talks, I kinda winged it), and despite the fact that there’s no way on Earth that Bowie would ever talk to CMG, some people seemed to think he actually wrote the review — or after the CMG relaunch when the byline changed, discussed it in an interview. People like the Onion A.V. Club, who included this paragraph in a January 2008 movie list (I’ve bolded the quote):

Like Jonathan Richman in There’s Something About Mary, Brazilian singer Seu Jorge drifts through Wes Anderson’s tragicomic adventure as a one-man Greek chorus. Rather than commenting directly on the action, Jorge simply sings covers of David Bowie classics that don’t really have anything to do with what’s happening onscreen, but fit well anyway. Sometimes Jorge’s Portuguese takes liberties with the lyrics: “Five Years” shifts from a tale of looming apocalypse to a tale of romantic longing and transoceanic travel. But Bowie didn’t mind, telling cokemachineglow.com in 2006 that Jorge “paid equal tribute to both myself and [his] own formidable abilities.”

The moral of the story: Don’t trust the Internet. Sorry, fellas! Oh, and for the record, The Life Aquatic is still my favorite Wes Anderson movie.