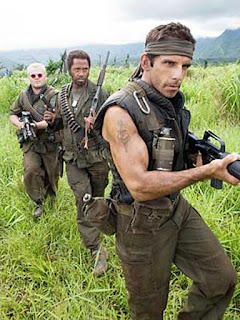 “I know who I am!” Robert Downey Jr. barks in a pivotal scene in Tropic Thunder. “I’m the dude playing the dude disguised as another dude!” If only it were that easy. Tropic Thunder is an ambitious hyphenate, a blockbuster, star-powered action movie dressed up in an elaborate Hollywood satire disguised as — well, it’s hard to say. An essay on the art of acting? A critique of false patriotism? An indulgent Ben Stiller-directed movie where Ben Stiller gets to live out his acting fantasies?

Yes, Tropic Thunder is a bit of a melting pot, but for the most part it’s a satisfying one. In his first directorial effort since Zoolander, Ben mostly reins in his Stiller-isms (for a comedy star, Stiller is still best in his more serious moments; remember Reality Bites?) in favor of a smart film that pokes fun at rich moguls, big-budget movies and the absurd chaos behind the scenes of that Hollywood magic.

Downey Jr. is triumphant as actor Kirk Lazarus, an Australian winner of multiple Oscars who’s so Method he “doesn’t break character until the DVD commentary”; Lazarus, in case you haven’t noticed, undergoes a skin procedure that leaves him black-skinned and sounding like Mr. T. This is funny enough as is, but he’s sharply called out on his minstrel show by Alpa Chino (Brandon T. Jackson), a black rapper-turned-actor who’s a less gangsta 50 Cent analog (Chino hawks a next-level Vitamin Water called Booty Sweat) with his own personal problems. (The unintentional joke here is that 50 is now actually starring in a movie with Al Pacino.) Jack Black plays Jeff ‘Fats’ Portnoy, an Eddie Murphy skewer; Black’s usual electricity is mostly wasted here, but he does get the film’s best joke — you’ll know it when you see it. Jay Baruchel rounds out the cast as a naive young actor with dreams of dating Jennifer Love Hewitt.

Much of Tropic Thunder‘s gags requires a spoiler-free review, but the laughs do come explosively, my favorite being a too-meta moment where Stiller toys with a fake severed head which, in the movie, is actually a real severed head which he thinks is a fake. Thunder is never too heavy a satire: Spoiled actors are flown into the jungle to shoot a war film guerilla-style, get themselves into a real combat mission and escape amid full-screen explosions. It’s a Hollywood ending, and as clever as Thunder is, it’s a Hollywood movie in the tradition of The Three Amigos or better, Stripes — a movie where Harold Ramis got to star in a self-scripted movie about getting babes and being an action hero. It’s certainly a funnier movie with the thought of Stiller’s self-direction in mind, even to the point of forgiving him a particularly indulgent ending twist, but the film tries to be all things to all people: explosions, black jokes and pointed industry critiques.

The film is most interesting when it mines serious territory via the relationship of Stiller’s Speedman and Downey Jr.’s Lazarus: Speedman, a falling action hero, wants to establish his acting credibility, while Lazarus has sacrificed too much, perhaps, for his. There are surprisingly strong ideas here about connecting with audiences and the dangers of falling too deep into character; ironically, these discussions happen in the crevices of an absurdist war-movie farce starring fucking Zoolander.

Still, one can’t fault the film for dreaming big. If it bites off more than it can chew, there’s more than enough meat — and popcorn — in Tropic Thunder to warrant a tour of duty.