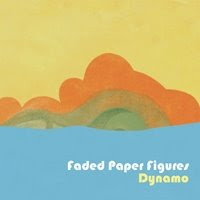 I have a rule about listening to every band that takes the time and trouble to e-mail me (prominent placement on ye old Rawkblog ain’t exactly the fast track to blogosphere domination, fellas). Most of them, predictably, aren’t very good, but the exceptions often wow me.

Faded Paper Figures are the latest to do so. Their debut, Dynamo, recalls the indie/electro hybrid of the Main Drag‘s still-great Yours As Fast As Mine, or to reference a band you’ve actually heard, the Postal Service with more guitars and less Gibbard lyrics. I couldn’t tell you if it was home recorded, but it certainly pulses with the beats of modern bedroom pop, equal parts drum machines and crisply recorded acoustic guitars chopped into a tasty, 43-minute indie salad.

It’s quiet, sentimental stuff — “North By North” includes the almost humorously hopeless line “You said a long, long time ago / you were happy being someone” — that’s as sharp and rhythmic as it is affective. Their sincerity isn’t quite as moving when it gets all sophomore year liberal arts-y (“Red State,” a love song about being — you guessed it! — blue), but then again, going back to college might teach Ben Gibbard a thing or two.

(Dynamo is out now and burning up the CD Baby charts)