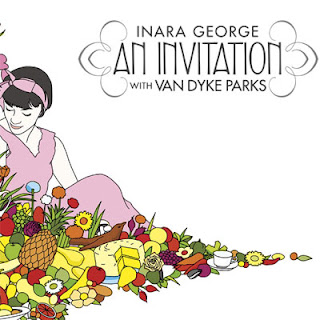 Assuming — and this is really giving people the benefit of the doubt here — that the only reasons not to call Joanna Newsom’s Ys a breathtaking work of staggering brilliance (or whatever) are that it’s 1) full of 10-minute songs and 2) sung by Joanna Newsom, naysayers are going to have to hear An Invitation. A full-length collaboration with Van Dyke Parks (Newsom orchestrator, Brian Wilson collaborator, American genius), Inara George’s An Invitation is like a Ys you can play at Starbucks. But it’s really good!

George is the singer of L.A. duo the Bird & the Bee, a group whose promising self-titled debut was an iPod mainstay for me last year. But even the most avid B&B listeners couldn’t have seen this one coming. An Invitation isn’t quite as sprawling as Ys, but it spreads its wings wide nevertheless, landing at some unforeseen intersection of Broadway, jazz standards and chamber pop that’s well off the beaten path.

The album is a playground for Parks, whose arrangements take on full musical duties here rather than the accompanying role they played for Joanna. His expertly directed string section and woodwinds flutter in different directions like dazed, lost butterflies, arriving under Inara’s vocals just in time to catch her pouring her smooth alto into the next movement.

As a singer, she’s more New Buffalo than Newsom, sharing the simple charisma of Sally Seltmann’s unadorned style. There’s no melisma here, no affectation, no squawking; just straight, strong song. The writing and Park’s freewheeling conducting may twist the tunes into mazes, but for those wearied by Ys, at least An Invitation gives you a beguiling guide.

(An Invitation is out now on Everloving)