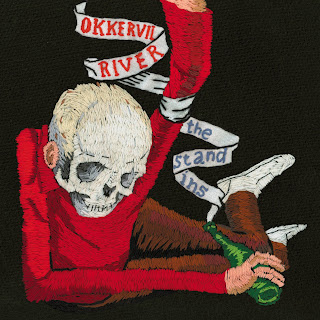 I don’t know about you, but I needed this record.

I’ve been thinking a lot lately about August Brown’s stunning essay on Bright Eyes and maturity — both his and Conor’s. The numbing affects of age on hearts and minds and ears. I’m 23; in the brief decade of my active participation in American popular music, it has become both priceless and free, the master of ceremonies to seemingly spontaneous, druggy American Apparel dance parties and a more frequent visitor to prisoners of headphone-bound lonely hearts.

It has become oppressively possible to hear too much — I probably have. Acoustic guitars and male whisperings just don’t gut me like they used to. I spend a lot of time somewhat guiltily listening to Cut Copy and Brazilian pop twice my age and thinking about buying a synthesizer. I have a job and a girlfriend and increasingly less interest in sad songs and/or waltzes.

Perhaps, to quote a man who knows something about these sorts of things, I still haven’t found what I’m looking for. I’m sure Will Sheff has. He must’ve, by now — he’s too much the rock historian, too grand a storyteller to fake it. Or at least that’s what he’d have you believe. You see, Sheff was a critic once. For all I know, he could be still, and that may be what drives him, the necessity of joining his personal canon’s leading lights in the hopes of outlasting the looming shadow of the grave (and the next generation of impressionable 15-year-olds, who will probably just download that Pink Floyd album anyway). To earn five stars would be only right; any less than four would be cause for self-flagellation.

Critics as musicians are failures, much more often than not; they know too much to fuck up, which is unfortunately a preventative measure to playing rock ‘n’ roll music. The Stage Names was a critic’s album, a set too theoretical to draw blood. This year’s companion piece, The Stand Ins, has a heartbeat, a pulse; throbbing rhythms written for life on the road. It’s had too many beers and spent too many hours on pay phones at empty truck stops. I will refuse to believe a laptop (God forbid, a MacBook Pro) was involved whatsoever in the making of this record.

Conor Oberst has long since given up writing bedroom tearfests in favor of Wiltern-sized sing-alongs, but Okkervil River’s ascendence from venue to venue hasn’t stopped them from breaking hearts, theirs or ours. Or mine. “You’re lying when you sing along,” Sheff sings in “Pop Lie,” but I’m glad it doesn’t feel like that way this time.

(The Stand Ins is due Sept. 9 on Jagjaguwar)