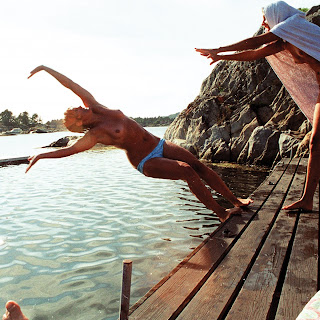 Greg Katz, scornful of my love affair with panning, once told me, “You have two ears! Get over it!”

Throw Me The Statue could do with some advice like that. They’ve filled up Moonbeams with enough stereo production to overload a guy with three ears (much less a standard binaural set) and possibly cause internal hemorrhaging in anybody with a 5.1 system. It’s also on the lo-fi side, a production style that doesn’t mesh well with excessive multi-tracking for people not named Jon Brion or Phil Elverum.

But in its quieter moments, this is a pretty nice indie pop record (I was going to say “retro”; are the mid-’90s vintage yet or have we got another couple years?) The singer has a charming Pedro the Lion-like passiveness and writes blithe little melodies that would sound much better if they weren’t trapped in trash-compacting arrangements. It’s no wonder that “Your Girlfriend’s Car,” a rare moment of open air, is the album’s best song — and the MP3 I’ve conveniently posted below.

Throw Me The Statue – “Your Girlfriend’s Car”: removed by request

(Moonbeams is out now on Secretly Canadian)