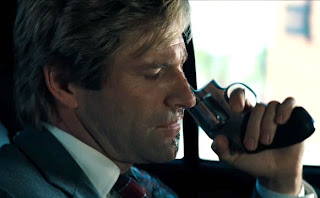 With The Dark Knight cruising toward the $500 million mark, there’s already talk of a sequel — and debate over whether Aaron Eckhart’s Two-Face/Harvey Dent will return. His status is left ambiguous at the end of the film: He lies on the ground, apparently dead, and while a funeral follows, this is, after all, a comic book movie. In the funny pages, as Pharrell might say, no one ever really dies. But according to a Dark Knight script acquired by The Playlist, Harvey Dent is… [Continue reading…]

“Dent Lies at the bottom of the hole, his neck broken. DEAD,” the script apparently reads. Guess that answers that one. So who’ll play the villain next time around? I almost don’t care — while another Batman film is inevitable, it’s also unnecessary. Another movie will be hard-pressed to match The Dark Knight‘s cinematic and financial achievements, and who would want to? TDK is the finest comic book movie ever made, the rare comic adaptation that tells a complete, compelling story. That’s more than enough for me.