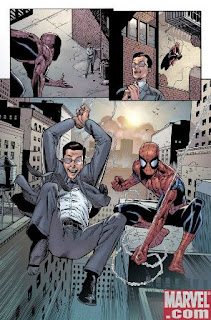 Every six months or so, I masochistically pick up a couple issues of Spider-Man, skim them and bang my head into the wall while remembering the Spidey glory days — long, long before “One More Day.”

But I may actually have to buy Amazing Spider-Man #573, out Oct. 15, which will guest-star Comedy Central superhero Stephen Colbert. The conservative-mocking comic is apparently running for President in the Marvel Universe, and the two quip-equipped heroes will team up to fight crime in an eight-page story.

Comic dudes — is Secret Invasion over yet? Was it awesome? I was holding out for the trade but I haven’t had the time to keep up.

The Dismemberment Plan – “Spider In The Snow”: mp3