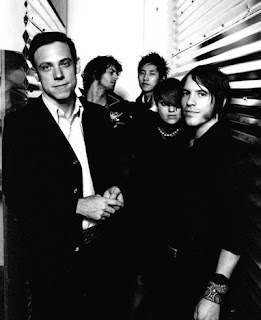 By now you’ve read Pitchfork’s hearty pan of Airborne Toxic Event’s debut album and seen the band’s, well, unfortunate but heartfelt response. Since my blogger New Year’s resolution is going to be “Stop talking about Pitchfork so as to help remove them from their ungainly spot at the center of the critical conversation,” I wasn’t going to weigh in on this — I don’t think the Airborne Toxic Event are a particularly good band nor one worth blogging about, though they do seem to be trying their damndest to follow in the Silversun Pickup’s mainstream-chasing footsteps.

However, Ian Cohen’s review did raise some larger issues about the Los Angeles scene (and Pitchfork’s response to it) which bear discussion. Some of my friends at the L.A. Times have done exactly that over on Soundboard, an e-mail roundtable which deserves a read.

Here’s my take. Essentially, Cohen (an L.A. resident) states that our fair city “lacks a flagship upstart indie band and wants one in the worst way” before eliminating Rilo Kiley (too old) and No Age (too avant-garde). But Ian, what makes an upstart indie band? Arguably, signing to a big indie label like, say, Sub Pop, a successful national tour, and a debut album with a 9.2 Best New Music review from Pitchfork … like No Age. Dudes are no less accessible than, say, Sonic Youth in their day, and with Pitchfork propping up the rest of the Smell scene (see that laudatory Abe Vigoda review) to the best of their abilities, it seems strange for a Pitchfork review to reject the very band and scene that the site seems intent on thrusting forth from the lo-fi underground. No, they’re not from Silver Lake, but the hipster neighborhood is hardly the beginning or end of the L.A. rock story.

L.A. has had more than its fair share of geographically diverse flagship bands over the years: any Laurel Canyon folk-rock act in the ’70s, any Sunset Strip metal band in the ’80s and then in the ’90s, Silver Lake heroes such as Beck and Elliott Smith. Calling for a band to represent the whole city may be not be possible now — and may have never been. “It sort of goes against the whole fabric of the city to assume any kind of musical monoculture,” August Brown writes aptly in the Soundboard discussion. The question is not if L.A. needs a flagship band, but if Silver Lake — like the Sunset Strip or Laurel Canyon before it — does once more.

Were Silver Lake and Brooklyn, indie’s (and thus Pitchfork’s) current It ‘Hood, rivals, perhaps. The L.A. acts certainly pale in comparison to the likes of Grizzly Bear, Sufjan Stevens, The National and Animal Collective, who you could pit against any scene in the country and find the contender lacking. Brooklyn, deservedly, is the capital of indie nation. But on the other hand, many of its bands — Sufjan and the National, for instance — are transplants from elsewhere.

And meanwhile, Pitchfork has played a small role in the dearth of ascendant Angelenos. It is next to impossible for an L.A. band to get a good review on the site: two of my favorite local acts, the Broken West and Division Day, earned a 6.7 and a 6.1, respectively, for their debut efforts. (This rule doesn’t seem to apply to hip-hop.) Is there a bias or an agenda at work? Perhaps, but probably no more so than any other critical publication. And Pitchfork’s influence, like that of any zeitgeist-rider, is a finite animal; bands have certainly begun passing through the blogosphere gates without their approval.

In sum, while Silver Lake continues to stoke a scene of sorts, its best days are behind it. But the disparate chords of Los Angeles still have much to offer from the city as a whole, from the continuing weirdness of Devendra Banhart to the Broken West’s fist-pumping power-pop to, yes, the Smell’s stinky noise. It would do the world, and more than a few East Coast-inclined Pitchfork writers, good to keep listening.

Critical Backlash is a column where I complain about things.