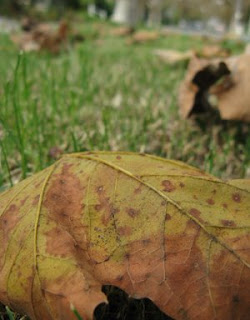 Admit it, sweater-setter: this is your favorite time of year. Even if you live in sunny California, watching the leaves fall as summer sighs into autumn is the activity of choice. Picking apples, making pies, listening to essential fall albums. Using headphones, enough wool clothing to make a sheep blush and a number of brisk walks, I’ve delicately chosen the finest albums for the season: a collection of deep, sad records as vibrant as maple leaves and as rich as cinnamon sticks in hot cider. See the list after the jump.

Elliott Smith – Either/Or
From the crackling guitars of “Pictures of Me” to Smith’s wistful lyrical sketches, Either/Or is the most fully realized of the late songwriter’s acoustic trio, and perhaps the most comforting. “Say Yes,” it finishes, a hopeful plea even more urgent as winter approaches.
Elliott Smith – “Say Yes”: mp3

Radiohead – Amnesiac
Kid A is a distinctly wintry album, chilled by electronics and snow-covered songcraft. But Amnesiac burbles and beeps with warmer tones; “Hunting Bears,” besides being a prescient ode to Sarah Palin, sifts through distorted notes like a pile of leaves, while “Morning Bell/Amnesiac”
bristles against the looming chill.

Neil Young – Harvest
With Thanksgiving around the corner, an album named Harvest would be a cheap pick if not for its yearning lyricism. “A Man Needs A Maid” pines for a changing season, while “Old Man” sighs, admitting to its narrator’s September mood.

Nick Drake – Bryter Layter
No album quite captures the sensation of a walk through winter woods like Pink Moon, Nick Drake’s final album and his most bleak and barren. Bryter Layter is its fitting prelude, a hopeful, string-riddled record that picks up the gauntlet thrown two years earlier by Van Morrison’s Astral Weeks.
Nick Drake – “Northern Sky”: mp3

Wilco – A Ghost Is Born
Enshrouded in Jim O’Rourke’s burnished production and roasted in Jeff Tweedy’s stumbling vocals, A Ghost Is Born offers a scattered, shattered collection of alternately gentle, tortured rock songs squeezing out their last moments of life.

The Softies – Winter Pageant
Too seasonal affective disorder-prompting to listen to in its title season, the Softies’ sophomore album is full of ballads about those left and those leaving, collectors of regret and even tentative steppers toward love. “You hid your smile with one hand, and with the other, you held mine,” Rose Melberg — the Morrissey of twee pop — sings in “The Best Days,” a track that’s downbeat chords paint a fall frown on a summer smile.
The Softies – “Pack Your Things And Go”: mp3

Joni Mitchell – Ladies of the Canyon
If only for “The Circle Game,” that instant campfire hymn, Ladies would land high on the list. But “For Free” captures the plight of those who become the worst kind of holiday postcards, and the incomparable “Woodstock” boils with lidded mystery.

Simon & Garfunkel – Parsley Sage Rosemary & Thyme
Simon’s most autumnal pieces came early: “Leaves That Are Green” (turn to brown, of course) and the serene heartbreak of “Wednesday Morning, 3 AM.” But Parsley is his finest hour, and Garfunkel’s too — never again would either man, individually or together, so gracefully fulfill their potential. “Cloudy” says it all, sung to the greying skies as windy harmonies blow by.
Simon & Garfunkel – “Cloudy”: mp3

Ryan Adams – Love Is Hell
Perhaps it’s just “Halloween,” a Love is Hell B-side that stands among Ryan Adam’s best tunes. But his 2003 dual EPs cast off the summer sheen of Gold and broke from the capsized boat of Heartbreaker‘s whiskey river, swimming through reverb, English girls and nights in the Chelsea Hotel as East Village denizens slip on their coats and boots and tramp out to the morning train.
Ryan Adams – “Halloween”: mp3

The Smiths – The Smiths
Morrissey is a man trapped perpetually between the changing seasons, ever ambigous and ever unhappy. His songs ripple and ring out like a very self-conscious voice from the mountain; the C86 bands who followed in the Smiths’ footsteps could fake Johnny Marr’s guitars, but they never matched Moz.
The Smiths – “Reel Around The Fountain”: mp3

Honorable Mention:
No fall list would be complete without a mention of the incomparable Jens Lekman’s “Maple Leaves,” the Belle & Sebastian discography, Math & Physics Club’s self-titled debut, Iron & Wine’s Creek Drank The Cradle, or — well, why not just post your favorites in the comments?