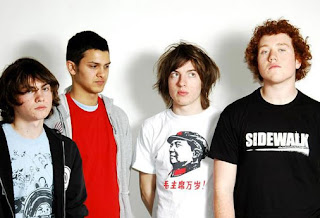 The trend of the latter days of the ’00s has gone thusly: Catchy indie rock band enters the scene with a limited release of an EP, debut album or demo collection, explodes underground for six months to a year, hits the mainstream, finally releases a long-awaited debut or sophomore album, flops and is forgotten. We’ve seen it happen to Clap Your Hands Say Yeah, Voxtrot, Tapes N Tapes, Tokyo Police Club — the list goes on. But some have managed to buck the trend by scoring two popular (read: not enormously disappointing) records in a row: this year, it’s No Age and Vampire Weekend, if you count the former’s Weirdo Rippers or the latter’s Blue CD-R. Shaky ground, I know.

But Bombay Bicycle Club could be the next to follow their lead. Tapped as one of North London’s best new bands, their “Evening/Morning” single drools with potential. The Club plays searing, breathless rock that holds back Sunny Day Real Estate savagery with bespectacled pop precision — the kind of sound that could win over Death Cab riders and Paramore paramours alike. And they’re hardly the hype fodder that the aforementioned bands have been, which can only bode well for an as-yet-unrevealed full-length debut… if we’re lucky. They’re more likely to join the rest of the would-be world-beaters in the hype machine’s ever-increasing trail of dead, but until then, dudes are Jam City and this song is the mayor.