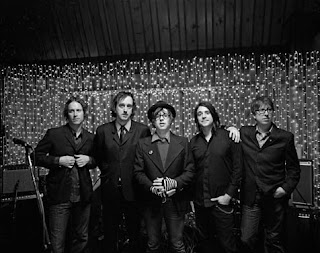 Ryan Adams, awesome, Batman-loving dude that he is, lets his fans record and bootleg his concerts in abundance, which is how I’ve acquired some new jamz fresh off his gigs from the last few weeks. If you’ve been following his blogging and overall descent into utter, unaffected eccentricity since the release of 2007’s Easy Tiger, you may not have particularly high expectations for Cardinology (and Easy Tiger didn’t exactly set the world on fire). I’m still convinced that ET was a record company-prodded rush job that a just-sober Ryan was willing to squeeze out and subsequently bask in the strange presence of sales and unlikely critical acclaim, but we have fewer excuses for this year’s offering.

Cardinology is apparently his last album for Lost Highway Records, a fact that can only hearten Ryanheads still waiting for official releases of Suicide Handbook and Ryan’s 24,542 other unreleased records. Judging by these live tunes, it may also be his weirdest. “Sink Ships” finds him chanting “War is over” like John Lennon. The faux country “Cobwebs” could pass for Fleetwood Mac (an influence, if an unmentioned one, since the Whiskeytown days), and “Magick” (yes, with a K) borrows a chorus from Justin Timberlake. There are bits of Cold Roses‘ easy-rockin’ vibe here, with some of the energy of Rock N Roll but little of its urgency.

If I don’t sound too enthused, it’s because I think Ryan’s fallen into the same trap Bright Eyes has over his last couple records. Both have traded in some of their songwriting spark and reckless muse-following for a brand of sanded-off country-rock that must be immensely satisfying to play live but melts into so much Fleetwood Macaroni and Cheese on record. This is the problem with a long career — Neil Young and Bob Dylan, two remarkably prolific songwriters who made album after classic album, both hit a wall in the ’80s after some 20 years of recording, only to re-emerge a decade later. Presumably Ryan and Bright Eyes, who can count some 30 or 40 albums and bootleg studio sessions between them over the last 15 years, are hitting the same wall. It must be a singer-songwriter fail-safe to prevent too much awesome.

That said, I liked both Easy Tiger and the last couple Bright Eyes albums (and it galls me immensely to compare these guys, by the way) for precisely the reasons that made them less than brilliant — there’s something to the sound of a musician enjoying his work, which these new tunes certainly showcase.

It’s hard to say what’s inspiring Ryan Adams right now — breaking up with Mandy Moore didn’t seem to stoke Zach Braff’s creative flames (aside: Oh God, Zach Braff and Ryan Adams are connected, what kind of world is this [aside aside: I think Mandy’s really the victim here]), and as with the aforementioned songwriter heroes, Ryan may have finally tapped out. In my tally, 29, Heartbreaker, Cold Roses and Love Is Hell are all great albums, along with Whiskeytown’s Pneumonia and Stranger’s Almanac; and among his unreleased sessions, Suicide Handbook and Destroyer Sessions are on par with the decade’s best singer-songwriter records. That’s a lot of awesome, folks. I guess what I’m trying to say is, play these songs after a few beers and let’s hope for the best.

Update: This album is in my hands and it sounds like fucking Phil Collins.

Album versions not cutting it for you? Click below for more live Bootlegs, demos and rarities.